January 2021 goes out with another blast of cold air

It is already two weeks since we were reflecting on our wintry New Year Plant Hunt walks with an online slideshow of finds for the zoom social.  Shropshire botanists did well this year with a good spread of lists made across the county, some by members who had never taken part before.  The aim is to find blooming plants, with visible reproductive parts on show, during a 3 hour walk.  The BSBI have already started analysing the data.  An amazing 1,811 people took part and recorded an extraordinary 710 species in bloom.

The warming effect of Shrewsbury town centre, plus garden escapes produced the longest lists for Shropshire.  Sarah and Gordon found the most species flowering with 65 species in Castlefields, which put this into the top 20 longest lists in the country.  Sarah spotted this pristine looking Black Horehound Ballota nigra:
There were plenty of the usual suspects from Shropshire including the top four most frequent for the whole country; Daisy Bellis perennis, Groundsel Senecio vulgaris, Dandelion Taraxacum agg. and Annual Meadow-grass Poa annua.  The latter was just about flowering on the Long Mynd:
Nice finds from other members included Sweet violet Viola odorata, a harbinger of spring, by John Martin in Shrewsbury:
Sandra Spence recorded Butcher’s Broom Ruscus aculeatus, which is always a nice find whatever time of year:

Dan Wrench recorded Bilbao’s Fleabane Erigeron floribundus, which is distinguished from the somewhat similar Canadian Fleabane by being more densely hairy, 5 lobed disc flowers and scarcely developed ligules not overtopping the phyllaries.  It was first found in 1977 and most records are currently southern but it is likely to be often overlooked:
Another species that is likely to be under-recorded, but spotted by Dan was Giant Bramble Rubus armeniacus, an invasive beast of a bramble, very robust with whitish underleaves:

In contrast, Small Toadflax Chaenorhinum minus, a small plant of well drained open habitats, such as railway lines and banks, walls and arable margins was recorded by Dan on his walk in Belle Vue and Sutton, Shrewsbury with his daughter:
Climbing Corydalis Ceratocapnos claviculata was flowering merrily in the South Shropshire hills which it seems to do all year round.  Whilst it looks and feels delicate it seems to be very hardy and interestingly is not touched by my Soay sheep:
A few folks found fumitories in flower and Dan's turned out to be Tall Ramping Fumitory Fumaria bastardii, take a look at those large, frilly sepals: 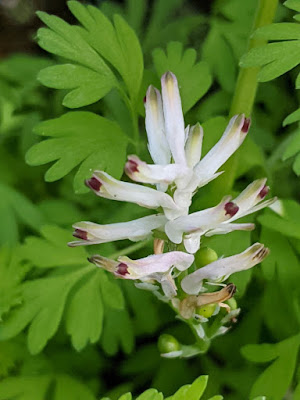 There were some more harbingers of spring, pushing through with Dog’s Mercury Mercurialis perennis and Lesser Celandine Ficaria verna in All Stretton, a welcome reminder that longer days and warmer weather are on the way, even as January exits with a blast of cold air:

Thank you to everyone who joined in the winter social by Zoom, including those from east coast USA, it was fun to catch up, see some plants and be challenged by the quiz questions from Martin and Penny and the cryptic crossword by Sue.  Ruth won the prize for the crossword challenge with all of the correct answers, well done Ruth!  We don't yet know when we shall be able to meet up for field meetings, but in the meantime stay warm, healthy and hopeful and look forward to new beginnings, or failing that the next Bot Soc meeting which is 2-4pm Sat. 24th April.  This will be another Zoom with the inspirational botanist Josh Styles, speaking about his achievements with plant reintroductions with the North West Rare Plants Initiative.