Today is the 20th Anniversary of the establishment of the Millenium Seedbank, located in Sussex.  It is the world’s largest underground seed bank & conservation resource for global wild plant species.  For more info on the project check out the MSB webpage.

It seems a fitting day to provide an update of the project which started in 2016 to review the genetic status, ecology, and condition of Least Water-lily Nuphar pumila, at Cole Mere, Shropshire, the only population in England.

The vulnerability of the species at Cole Mere was of concern and the project aimed to:

1. Provide a summary of the ecology of Nuphar pumila, management and monitoring recommendations

2. Carry out seed viability tests, and propagate seeds and rhizomes for ex-situ conservation and public display at Kew

Seed pods were carefully collected, making sure they were the right species.  The seed pod has a lobed stigmatic disk in contrast to Yellow Water-lily Nuphar lutea which is also present at Cole Mere.
The Nuphar pumila seeds were found to be 95% viable, which was great news.  BUT successful germination depended on very specific conditions, especially light levels and only 10 live seedlings  were obtained from 100’s of seed, which was very labour intensive.  Even worse news, all of these seedlings subsequently died.  The seedlings were watered with tap water and Kew had problems with algal growth. 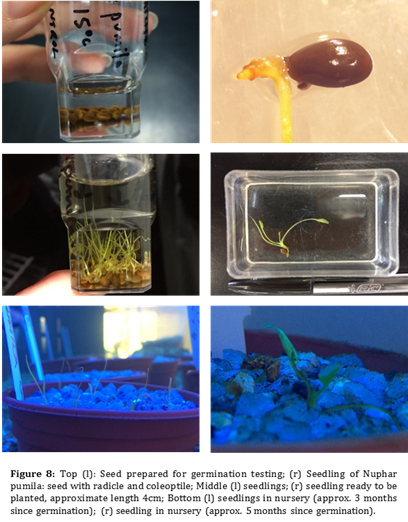 So hopes are now pinned on the rhizomes which were collected during the same operation.  Each year many free floating rhizomes are found on the lake edges, possible uprooted by waterfowl, likely mute swans feeding on the submerged leaves.  Some of the less bruised ones were collected and taken for propogation, but the majority were too battered and died:
However, recent news from Kew is that from the remaining rhizomes with healthy shoots they have managed to divide these and have several healthy plants in the collection which they hope to divide again.  The best conditions appear to be a loam based compost and outside in ambient conditions rather than indoors in a controlled environment.  The mixed success of the propogation shows how important it is to ensure in-situ conservation measures at Cole Mere are as favourable as possible for the species and to continue to monitor the populations.
Posted by Mags Cousins at 17:15