It was a bright and sunny start to our first week of learning to live with movement restrictions.  Margaret sent photos of some lovely blooms from her garden including Viola riviniana Common Dog-violet with a fine bluey colour to the flowers and you can just make out the pointed sepals, blunt sepal appendages and the notched spur: 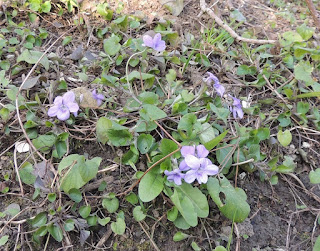 As well as previous articles in the Shropshire Botanical Society newsletters Spring 2001 and Spring 2015, there are several helpful guides to violets floating around the internet at the moment including; the BSBI Plant Crib for Violas; a photo sheet by Discover the Wild and one of many ID sheets by @DinkyMoira on twitter: 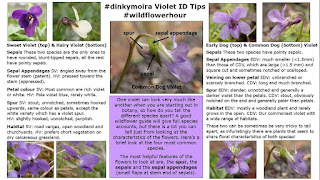 Margaret also has Ranunculus ficaria Lesser Celandine in her garden.  If you are feeling more adventurous remember there are four subspecies of Lesser Celandine and this useful account on the Wildflower Society webpage gives a nice summary of the features and also the confusing names changes. 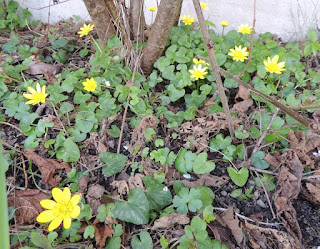 Small tortoiseshells were sunning themselves in Margaret's garden at the beginning of the week but but the weekend there was a chill wind which might have driven the first emerging insects back into shelter. 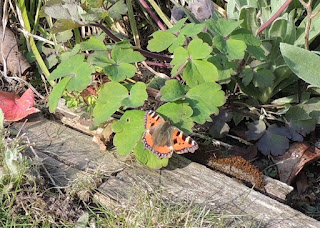 Wishing you all a calm and healthy week and we'll be back with more botany on the doorstep soon.

Mark Duffell kicks off our series of botany during lockdown with an amazing spot in the Gateway car park.  In preparation for the restrictions on movements he went to Gateway on Monday to retrieve some paperwork from the Manchester Metropolitan University office.  Whilst waiting for Jenni, he decided to have a walk round the Gateway car park and make a species list and this is his account...

"I ignored anything obviously planted and only recorded the truly naturalised, e.g. Buddleja growing in the pavement cracks rather than growing (possibly planted) in flower beds. Was pleasantly surprised to see 25 species, including Erophila verna sl. making quite a show on the brick paviours, although with no hand lens couldn’t separate the species.

Most surprising was Corydalis cheilanthifolia Fern-leaved Corydalis native to China. It was growing in gravel against the brick wall, and would have been under at least 50cm of water a few weeks back. Did it arrive previously by floodwaters, perhaps from a car park users boot as seed? It certainly can self-seed in gardens, but this is the first time I have seen it in the ‘wild’.

Excitingly this would appear to be a new vice-county record. Previously there have been 86 UK records, with the closest other record being made by Prof. Ian Trueman and Peter Millett in 2008 in Staffordshire near houses." 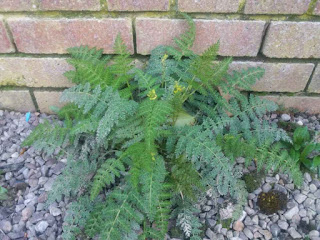 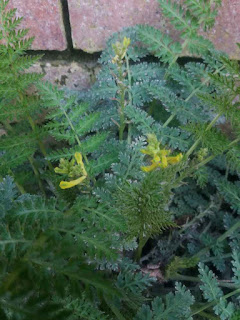 Under the new Covid-19 restrictions on movement announced last night, botany in spring 2020 is coming closer to home.  We'll all be staying at home, only going outside for food, health reasons or essential work and staying 2 metres (6ft) away from other people.  That doesn't mean we can't get up close and personal with the botany on our doorstep and maybe even observe things that you had never noticed before.

Who knew, for instance just how fiercely hairy the new leaves of Geranium lucidum, Shining Crane's-bill are: 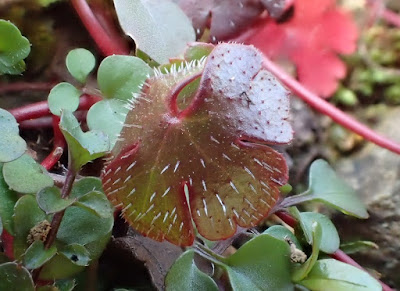 In an attempt to stay connected with Shropshire Botanical Society friends there will be a new post as frequently as we can muster for wildflowers coming to life on our doorsteps.  It might need the help of some of you out there, so please do get in touch with your photos of garden weeds, because we love weeds!

These are difficult times and you will not be surprised to hear that the Shropshire Botanical Society spring AGM is postponed until Sept. 2020 and that we have cancelled all field meetings, at least until the end of May 2020. Look out for further notifications here, also on twitter @ShropBotany, by email and facebook @ShropshireBotanicalSociety as the situation could change.

The main thing is stay safe everyone and we will resume the programme as soon as appropriate.  The spring newsletter will be printed soon for members, meanwhile if you have pictures you wish to share of Shropshire wild plants local to you, please do, either ones you know or even ones you don't, when maybe the online botanical community can help you with identification.  Gardens, pavements, walls, paths and fields will all have some wild plants coming to life even if some of your favourite open spaces are becoming out of bounds.  It would be nice to see what is showing in Shropshire, even if we can't go as a group.

This was Moschatel, Adoxa moschatellina two years ago, 22nd March 2018, in local woods, I shall go out tomorrow and see how it looks this year, I suspect a little more advanced as we have had such a mild spring. 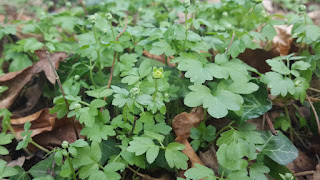