At sixes and sevens, or even eights

Hopefully you all enjoyed a read of the Spring Newsletter over the Easter weekend, emailed to you via the Google Group mailing list rather than printed and posted, for reasons that don't need explaining.  In case you are not on the mailing list and haven't yet seen it, you can find it on the Newsletters page of the website, just click the link and read it on line.  Or, you can download a pdf copy from Dropbox.

Members continue to find botanical cheer, no doubt aided by the fine spring weather.  Lalage came across this fantastic patch of Paris quadrifolia, Herb-Paris on Wenlock Edge during a woodland exercise walk.  Always a super plant to find, indicative of ancient woodland and preferring base rich soils.  There are plants with four, five and six leaves visible in this picture: 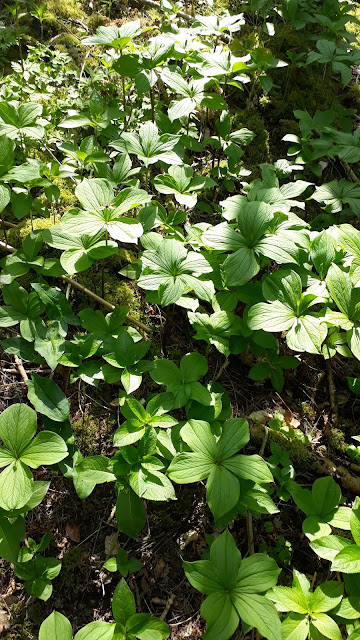 The flower is in the middle, interesting rather than showy but with leaves like that what does it matter! 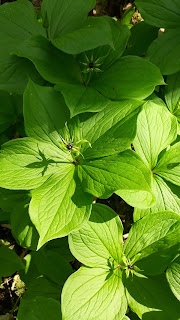 Staying in the woods, Anemone nemorosa, Wood Anemone also seems to vary quite a lot with the number of petal-like sepals, here there are six, seven and even eight sepalled specimens: 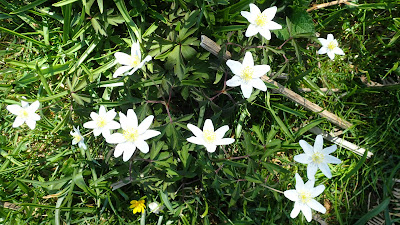 Likewise Ranunculus ficaria, Lesser Celandine, in this patch on the edge of the Long Mynd is also quite variable, here with eight and eleven petals: 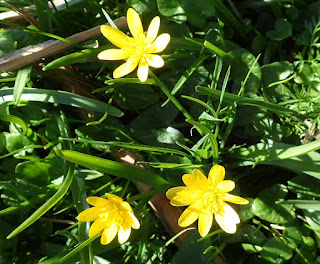 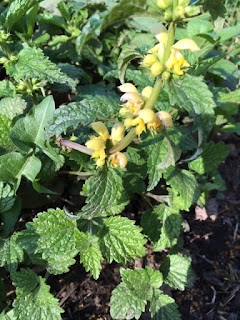 Peta spotted some Lamiastrum galeobdolon, Yellow Archangel, the real deal ancient woodland indicator, unlike the variegated spp argentatum garden escape which is galloping along our hedgebanks.

Pirkko found the hybrid, P. x polyantha, False Oxlip growing with Primula veris, Cowslips and near to the other parent P. vulgaris, Primroses: 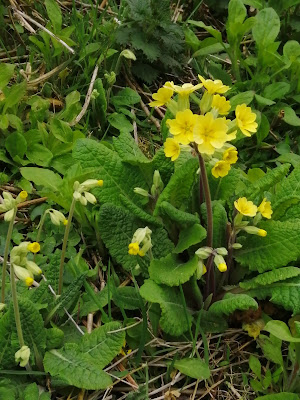 Moving out into the open Pirkko also found the diminuitive Erophila verna agg, Common Whitlowgrass on an almost bare limestone path in Nantmawr: 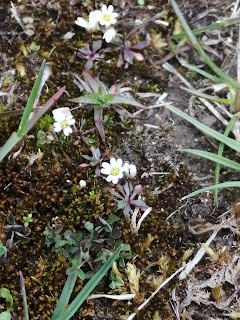 Don't forget that this is actually a group of similar looking species but you will be relieved to know that the aggregate comprises only three species, unlike the infernal dandelions, so is actually quite do-able.  Sarah Whild would love to have your records: E.verna, E. gabrescens or E.majscula, please send herbarium specimens with these records though.  Check out the BSBI Erophila plant crib for a key and images on the VC77 botany website.

So just to end on a blue note, in colour but not in spirits is the lovely Veronica filiformis, Slender Speedwell: 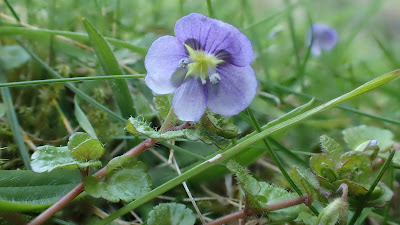 
Taking the theme of botany on the doorstep quite literally, Jane has sent this photograph of Primula vulgaris, Primroses and Viola riviniana, Common Dog-violets gracing her delightful rustic doorstep.  The tree stump is an old Taxus baccata, Yew tree which gave the farm its name: 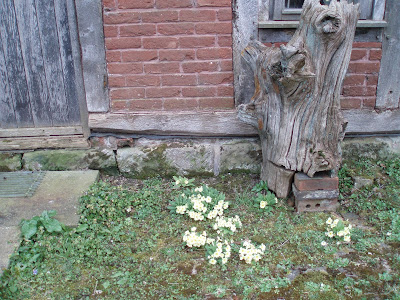 Only going slightly further afield and never one to miss an opportunity for some recording, John is giving his local square SJ5011, a thorough going over, each day a few more records from his local walk.  This Daphne laureola, Spurge-laurel was from last week in the hedge by the council car park on Wenlock Road, Shrewsbury on the way to the allotment.  He didn't say which weeds were actually on his allotment! 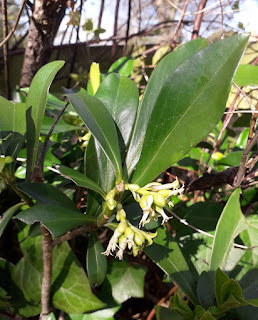 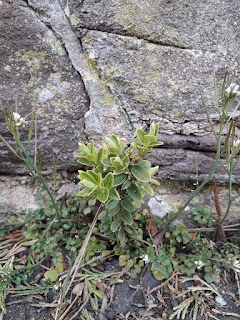 John is also scrutinising the cracks in the pavements and the bottoms of walls and spotted this Veronica brachysiphon, a Hebe from New Zealand, although this one probably seeded from someone's garden.  I had never thought about the scientific name of Hebe before; brachysiphon is from the Greek, meaning short-tubed (brachy- = short, little; siphon = reed, straw, tube), and presumably relates to structure of the flowers.  I wonder if this one will get a chance to flower this year.


Peta has been casting her gaze downwards (normally she's looking upwards searching the skies for the returning Swifts!), and has bravely tried her hand at photographing the diminutive Adoxa moschatellina, Town-Hall Clock, or Five Faced Bishop.  It is fiendishly difficult to capture this plant to show the leaves and the five sided flower, it would definitely be easier if it was a two-faced bishop, but always lovely to see this ancient woodland indicator. 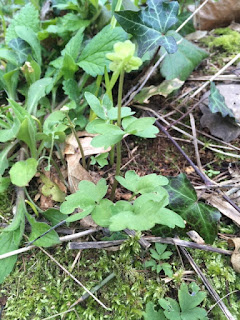 Lastly for this post is a blooming Damson from Andrew's garden, Prunus domestica ssp. insititia, hopefully it will be good year for delicious fruits too: 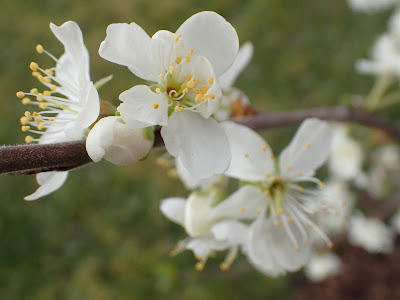 Andrew offers some tips about distinguishing the Prunus species.  "Like our native Prunus spinosa, Blackthorn, the flowers appear before the leaves (on many varieties at least!) but the flowers are larger.  Flowers before leaves is also a trait of  Prunus cerasifera, Cherry Plum another early flowering Prunus which is often planted on roadsides.  All these species can be spiny.  Stace separates Cherry Plum by its first year twigs which are green, glabrous and shiny, as opposed to dull grey and often hairy (I've not found the twig colour very reliable though).  Looking at the flowers, I've seen varieties of Cherry Plum with white to pink petals, but never with the cream colour petals of Blackthorn.  With Prunus domestica ssp. domestica, the Plum, apparently the flowers and leaves appear at the same time, and it is not spiny."

That's all for now folks.  Here's to a bit of sunshine and warmth that is forecast for the weekend.  Stay safe and healthy and and we'll bring you more local botanical finds soon.