More on Sedges... by John Handley

Just like everyone reading this post, being in lockdown, I’ve had to adjust my botanising over the recent months. In the first instance I was trying to sneak a look at plants whilst undertaking my hour of exercise – at one point trying to be inconspicuous whilst admiring the Convallaria majalis, Lily-of-the-Valley, that has naturalised within Bridgnorth Cemetery.
Recently I’ve been able to enjoy botanising locally which has provided a respite for my family as much as me. One of the areas I’ve been exploring is Stanmore Country Park, an area that has developed from scrub after the RAF Bridgnorth Training Camp was closed in 1963. The vegetation would initially have been dominated by Salix caprea, Goat Willow, and Betula pendula, Silver Birch, and this process is still enclosing the few areas of open grassland that remain. It is an area that is commonly used by dog-walkers, including my family and I. It didn’t occur to me that the secondary woodland and grassland held much interest but encouraged by Ed Andrews, the Country Parks and Heritage Sites Manager, I decided to have a closer look.
I was pleasantly surprised to discover a diversity of species and semi-natural habitats that are providing a great deal of benefit for local wildlife as well as a much valued space for local residents. Along with over twenty eight individual Epipactis purpurata, Violet Helleborine (is it a good year for them?) I also recorded Carex divulsa subsp. divulsa, Grey Sedge. This is regarded as a rare plant within Shropshire (Lockton & Whild, 2005). The Rare Plants of Shropshire remarks that "although this is a common species in the south of England and Ireland, Shropshire is just on the edge of its range, and it seems to occur here only as a casual.  Of the two subspecies, the only one to have been found in Shropshire is ssp. divulsa. It has been recorded on roadsides, ditch-banks, and along paths in gardens."
The other sedge that I recorded, occurring quite frequently in the better grassland on the acid, sandy soils that occur around Bridgnorth, was Carex muricata subsp. pairae, Small-fruited Prickly-sedge.  This is not to be confused with C. muricata subsp. muricata, Large-fruited Prickly-sedge, which is believed to be one of the rarest sedges in Britain, but occurs in Shropshire, discovered in 1999 by Dr Sarah Whild on limestone scree at Jones’s Rough (SJ2424).
Grey Sedge and Small-fruited Prickly-sedge are in the subgenus Vignea where the inflorescence is more compound, and the spikes are small in comparison with those of many species in subgenus Carex.  Members are characterised by having bisexual, sessile spikes, where the female flowers have two stigmas each. As you can see from the images the two species differ markedly by the interrupted inflorescence and diamond shape of the utricles, narrowed from above and below in Small-fruited Prickly-sedge.

Exploring in the neighbouring monad, at a local reservoir with a boggy margin, I came across another couple of sedges.  Carex hirta, Hairy Sedge, is less discriminating than many sedges and often the first sedge to come to my attention because of its conspicuous hairiness.  In amongst the verdant vegetation of the water’s edge the swollen, golden utricles were conspicuous, although the grazing water-fowl appeared to prefer Carex disticha, Brown Sedge, which was spreading through extensive rhizomes. A single tuft of Carex pseudocyperus, Cyperus Sedge, with its pendant piano-wire peduncles and bristly inflorescence was great to see, although common in the centre and north of the county where there are more water bodies, it isn’t so common in the south of Shropshire. 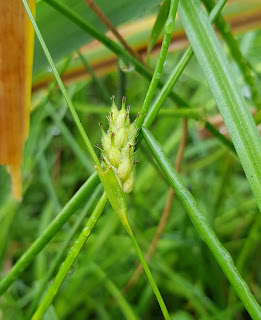 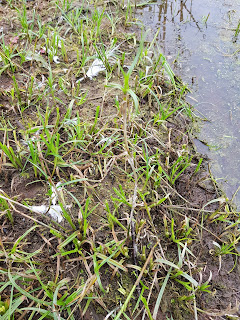 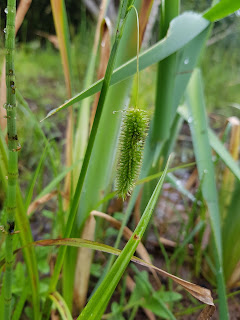 Carex disticha, Brown Sedge                     Carex pseudocyperus, Cyperus Sedge
Searching within the surrounding grassland I recorded Carex pilulifera, Pill Sedge, a tufted sedge that can tolerate the drier soils in the south east of the county.  Here it was lacking the close-set male flowers which I think gives it a distinctive shape.
If anyone wants to share their own botanical experiences during the last few months, do email us on shropbotsoc@gmail.com.
References
Lockton, A. J. & Whild, S. J., 2005. Rare Plants of Shropshire. 3 ed. Shropshire: Shropshire Botanical Society.
Posted by Mags Cousins at 18:26